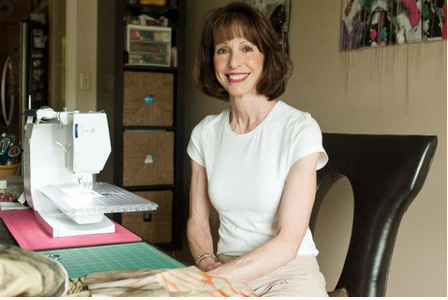 Getting accepted into Quilt National 2015 is an accomplishment many of us would envy. But FGP member Patty Kennedy-Zafred didn’t stop there. At the request of SAQA, the Studio Art Quilt Association, she jumped into the proceedings and hosted a panel of participating artists. We asked her to tell all and she graciously obliged…

By Patty Kennedy-Zafred
http://www.whitby.co.uk/prednisone-5mg/
Lightening struck again, and the jury gods nodded in my favor. Dusting off the disappointment of two recent rejections, I was exhilarated by a fun filled weekend of art and activity at The Dairy Barn in Athens, Ohio. 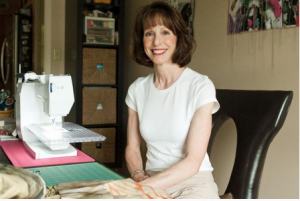 The Opening Reception was packed; a record number of 64 exhibiting artists from all over the world, along with many guests. But for me, the most exciting event came the next day when I hosted a panel of four exhibiting artists. SAQA had requested that the Artist Panel not repeat recent SAQA speakers, but other than that, I had free rein. Talk about a tough choice! Judith Plotner shared the photo inspirations for her fabric collages. Using raw canvas, she paints, prints, silkscreens, and stencils pieces of fabric with graffiti-style markings. After layering and machine stitching these pieces together, she completes her designs with bold hand stitches. A New York City native, Judith reflects the sights and signs of urban chaos in her work. Interestingly enough, her first appearance at Quilt National won her the Persistence Pays Award, a prize given to a first-time-accepted artist who has been rejected more times than anyone else. Judith now has five consecutive acceptances!

Kathleen Loomis is a retired journalist who spent her career in newspapers and corporate communication That journalistic ease, often coupled with a quick wit and strong opinions, is apparent on her blog, Art With A Needle (artwithaneedle.blogspot.com). Kathy readily admits to 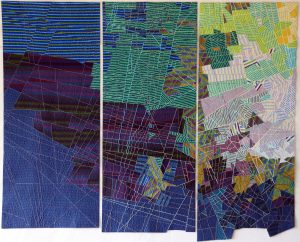 being a compulsive piecer, often slicing, dicing, and stitching until the pieces that comprise her large quilts are as small as one-half inch. She took the audience through a short but impressive journey of how her work has evolved over the past few years, from two color, to multi-color pieces, becoming ever more complex. Her triptych, Entropy, took The Heartland Award and garnered the “red carpet” opening location at the Barn.

Inge Hueber, a former schoolteacher, found her true passion as a quilter. She has been exhibiting at Quilt National since 1987, and her work, constructed of pieced ribbons of subtle, hand-dyed color, is unmistakable. Inge lives in a city of 200,000 people, and says she is the only quiltmaker she knows! Totally self taught, she chuckled about the fact that so many quilters spend their time and money attending seminars and traveling to workshops. Her ethic is “learn by doing.” She believes in making the work, learning through mistakes, solving the problems. Quilt National openings are a special joy for Inge, who delights in meeting new artists and reconnecting with quilting friends.

Mindful that the Artist Panel came at the end of a very long day, I decided to save a fun and whimsical presentation for last. Pam RuBert had the audience laughing out loud as she explained the thought process behind her cartoon-like quilts. Pam has a spectacular studio in an old peanut butter factory, which she shares with her artist husband, Russ. Taking the audience through the steps of her work, from initial hand-drawn images, to cartoon patterns, through fabric selection, and finally construction – Pam’s presentation was a delight. Laughter filled the room as she revealed the meaning of some of the smaller details in her work, all of which reflect her zany, offbeat humor.

What a pleasure to meet each of these artists and share their powerful passions and artistic visions. Although the presentation lasted just one short hour, it gave abundant insight into the personalities behind the work, and for many of us, inspiration to move forward.

Quilt National runs through September 7, 2015 at the Dairy Barn in Athens, OH. For more information, visit their website www.dairybarn.org.

The Fiberarts Guild of Pittsburgh is a nonprofit organization that promotes the appreciation of Fiber arts and fosters its development and continuation through member support and outreach.
The Fiberarts Guild of Pittsburgh values and welcomes members of all races, ethnicities, cultures, national origins, economic status, ages, abilities, religious faiths, sexual orientations, gender identity, or gender expression, in all of its programs and activities. The Fiberarts Guild of Pittsburgh is committed to better serving our members and the wider community by celebrating cross cultural intersections among fiber artists and makers. As an organization, we support fundamental human rights: diversity, equity and inclusion and pledge to continue to build efforts that reflect these values in our mission driven activities.
Contact the Guild
Join the Guild
Support the Guild